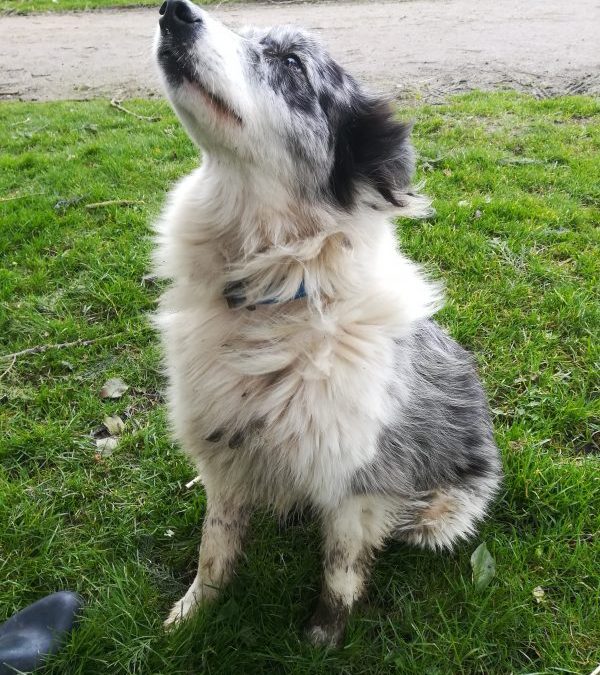 The Rescue Story of a Courageous Dog and a Brave Volunteer

One Thursday afternoon recently, the Animal Foundation received a call from a concerned member of the public about a dog that had been lying at the side of the road near Brownstown, Co. Kildare. The dog was conscious and did not appear to be too much bother but had been lying in the same place for nearly 2 hours.

It’s sometimes hard to know just how much pain an animal is in unless you really look closely, but most of the public are afraid to approach a dog in distress resulting in a diagnosis from a distance which more often than not is the wrong one.

When our volunteer arrived on scene, the dog was in the same position, and from a distance did not appear to be in too much distress. It wasn’t until he got right up to the dog and could see she was lying on a pool of blood that was coming from underneath. This wasn’t the only sign that the dog was in pain as he could tell by her eyes and her whole persona she was suffering. His extensive experience of canine first aid allowed him to take control of the scene and make the necessary observations.

Slowly approaching and reassuring her, he was able to get close and see a little more. The amount of blood she had lost and was still losing was really bad so he knew then this was an emergency case that required veterinary care as quickly as possible. Gaining more of her confidence and trust he was able to gently turn her and examine her wounds. At that point she reacted viciously due to the pain.

A dilemma now faced our volunteer; “I had to do what was necessary for the dog to have a chance to survive. There was no way I was getting a muzzle on her or picking her up without hurting her. So, I sat gently with here again gaining her confidence so as she would let me rub her again. I had to grab her by the scruff and lift her into the van I knew by the way she was literally trying to savage me she was in pain but it was a necessity that had to be done if she was to make it.” What took only a few moments seemed like hours. 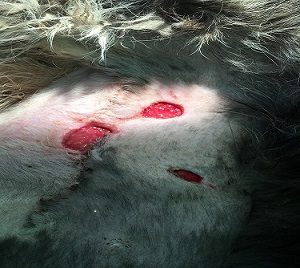 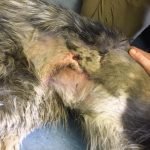 Upon arrival at Hawkfield Vets, it took three people to sedate her. Minutes later she was on the operating table and the full extent of her injuries could be seen. The vet had to operate straight away if she was to make it and she had lost a lot of blood, so it was touch and go. The first operation took two and a half hours followed by another the next morning. It was a success

Dolly, as we now call her, had really deep flesh wounds and she received a lot of stitches. She remained at the Vets for a further week before being discharged back to us at the Foundation where her recovery and convalescence continued. At this stage she has built up a defence mechanism of sorts. She will let you approach her and let you rub her a little, but, still traumatised by the attack she had endured, she can snap viciously. Dolly has been to hell and back. It was going to be a long road to not only heal her physical injuries but her mental wounds too 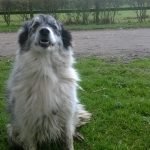 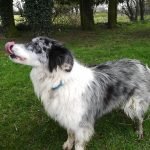 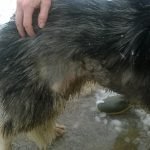 Dolly’s recovery has gone amazingly well. The pain of her injuries has gone and the fear of being hurt has disabated. She is a lot more social with humans and other dogs as we can now physically touch her all over and she seems to like it.  To see how well Dolly is recovering, click here to see our latest video of Dolly at play.

Dolly continues to need our help and assistance before she is ready to be rehomed. If you would like to make a donation towards her well being, please go to our website animalfoundation.ie/donate. You can also make contributions towards Dolly’s ongoing care at Hawkfield Vets, Newbridge, Co. Kildare.